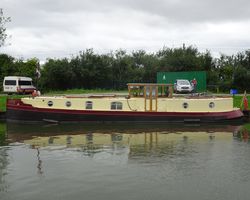 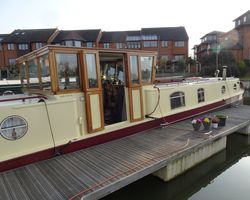 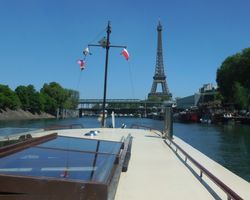 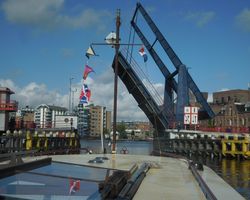 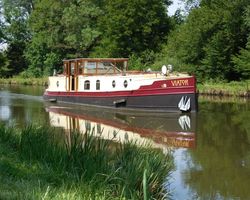 The hull was constructed by MG Fabrications in 2006 of steel in a configuration of 10mm base plate, 6mm sides and 4mm superstructure. The bow and stern have been remodelled to our specification - mostly by Paul Barber Boatbuilders. This has involved the addition of an anchor with electric windlass, the reconfiguration of the fore end lockers to provide for custom made flexible water tanks and to provide some external storage space, the addition of a steel hatch at the stern and finally double bits at both sides of bow and stern in order to secure the boat correctly and swiftly.

The boat has been docked every 2 to 3 years while we have owned her, for blacking with standard protection, and to replace the 6 sacrificial anodes as necessary. The last official survey was conducted in 2017 which showed no significant wear. This survey is available for inspection on request.

At the bow there is a 35kg Danforth style anchor secured in it's own housing with 80m of galvanised chain. This is worked by a Lofrans Project 1000 electric windlass operated by two foot switches mounted on the front deck. There is also an emergency release in the wheelhouse should it be required. The windlass can also be operated manually in the event of electrical failure via the supplied handle. We've used the anchor several times - on lakes in the Netherlands and also while waiting for tides. It has always held the boat securely even in very windy conditions.

There are two lockers in the front deck with lids secured by gas struts. The first is an integrated gas locker large enough to accept 2 13kg gas tanks with over side drainage. The boat will be supplied with 2 Calor Gas propane bottles which are controlled by a Clesse CSR OPSO regulator - fitted new in 2022. This type of regulator has a Safety Reset button to prevent over pressurisation. The gas is used for the oven/grill and 5 burner hob in the galley. The gas safety certificate was issued in 2021 and by the subsequent Boat Safety Examination in 2022.

The second locker gives access to the chain locker for the anchor which is sectioned off and independently drained via small drain holes to port and starboard. Below this, and below the storage decking are two custom made flexible water tanks from Duratank. These have been designed to fit the available space and are installed according to the manufacturers instructions. There are two breather pipes which vent onto the deck, and a separate filler pipe. This fills the top tank first, which is joined to the lower tank - from where the water feed to the boat is taken. There is a submersible bilge pump installed alongside these tanks, which has a loose pipe. This is required as condensation can appear on the outside of the tanks - and usually requires pumping out every 18 months or so. Above these tanks we have installed a wooden deck to create some storage space. There is a 'self operated pump out kit' here - just in case everything else breaks!

We have installed a 3m wooden mast secured by two stainless steel bolts through the tabernacle, and stayed with 2 stainless steel cables. The mast has the 12v anchor light mounted on the top (with led bulb), the steaming navigation light (originally specified for vessels up to 20m in length, but now has a low energy LED bulb which is much brighter), and a radar reflector which is a requirement for navigating some larger waterways. At the base of the mast is a 12v tunnel light (correctly angled), and a 12v electric horn operated from the wheelhouse. The aerial cable for the supplied satellite dish also exits the cabin at this point via a waterproof bulkhead gland. Either side of the mast are port and starboard navigation lights secured to the cabin side. Again these have been fitted with high intensity LED bulbs which far exceed the required MCA specification. 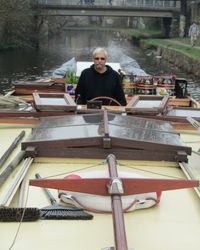 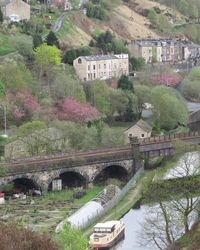 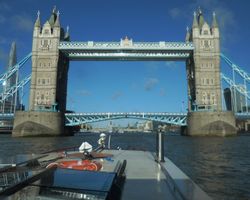 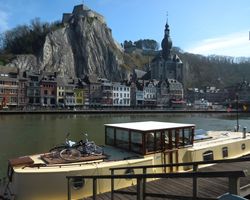 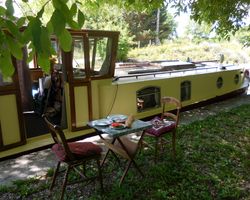 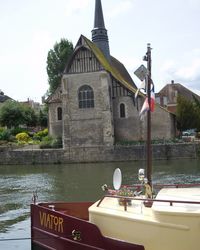 The front cabin is fitted with 4 opening portholes, 3 windows with top openers and a sliding window with top opener in the galley. All of these were supplied by Wesley Marine Windows - who have spare parts available should they be needed. There are 5 UFO style roof vents in the front cabin, two of which contain down lights and extractor fans (over the hob). Two 150w solar panels are secured to the port side of the roof. These were supplied by Onboard Solar and are connected to a dedicated MPPT controller in the wheelhouse. They are sufficient to keep the fridge running when we are away from the boat.

The rear cabin features 4 opening portholes of the same design as those in the front. We have fitted these with temporary secondary glazing for use in the winter time. This keeps the bedroom cosy and warm in the winter, but allows plenty of ventilation during the summer. There are 3 UFO style roof vents.

At the stern is an offset stern navigation light connected to the same circuit as the forward lights. We have added a steel deck cover supported by gas struts. This opens to a small external space. There is access here to the steering hydraulic ram and rudder post. The rudder post is packed in a similar way to the stern gland and has a manual grease point. This needs occasional greasing and repacking to prevent water ingress into the stern space. Below here is a weed hatch which allows access to the propeller while afloat. Viator rarely picks up rubbish on the propeller though, and if it does it's best cleared by use of the small shaft with hook. I think in 12 years we've used the weed hatch maybe 3 times. There is plenty of room here for storing fenders, spare ropes, mooring spikes, etc.

Also stored in the rear locker is an emergency steering system. This is designed to fit on the existing rudder post should the hydraulics become disconnected for any reason. It is assembled to create a crude tiller system which can be operated from the rear cabin roof - not comfortable but should be sufficient to avert disaster and get you to a safe port. Also supplied is a Calder & Hebble Hand Spike should you wish to take the boat to West Yorkshire!

Finally there is a base for the supplied flag pole for flying an ensign.