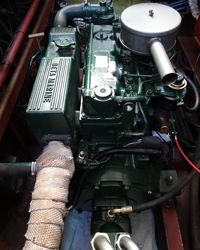 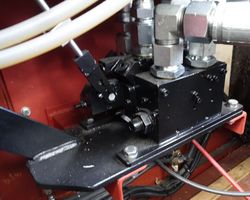 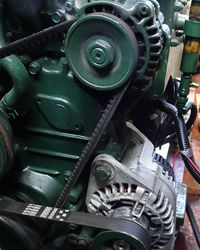 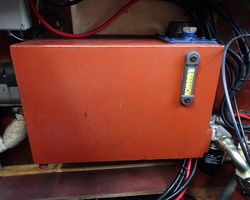 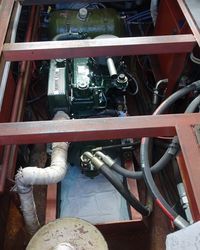 Viator is powered by a transverse mounted Beta Marine BV3800 90hp 4 cylinder diesel engine. This has been serviced annually during our ownership, with a 'top end' overhaul in 2018 by Thorne Boat Services where no problems were reported. Diesel is supplied via an array of 2 filters mounted on the tank and a third on the side of the engine from an integrated tank mounted under the port side gunwhale which holds approx 450 litres. The tank was opened and cleaned in 2014 and all fuel that has been loaded since has been treated with Fuel Set diesel treatment.

The cooling is via a 50/33 water/coolant mix in a closed system. There is a skin tank on the port side baseplate. The cooling is thermostatically controlled and is topped up via a filler cap on top of the engine. The cooling system is routed via an oil cooler (to keep the hydraulic oil temperature under control) and a calorifier mounted above the skin tank to provide hot water to the boat. The calorifier also has a mains powered immersion heater which can only be used (via a timer switch in the wheelhouse) when plugged into shore power.

There is a Type AB control panel in the wheelhouse which monitors engine temperature, oil pressure, electrical charging and engine revs. The engine is started by a preheat ignition system and a 12v starter motor. This motor is supplied by 2 x 110Amph batteries which are dedicated only to this function. These batteries are charged by a dedicated alternator. The starter electrical system is completely separate to the boats domestic supply. Full engine manuals are supplied.

The drive is via a hydraulic pump and motor system supplied by Hercules Hydraulics Ltd. The originally supplied control valves and all large piping were replaced in 2018 for more modern equivalents mounted to the front bulkhead. There are two separate control valves, one for the bow thruster which contains a pass through to the main propulsion valve. This allows for the bow thruster and main drive to be operated at the same time. The oil tank is situated in the engine room with a filter and cut off valve next to it. The seals on the pump were replaced in 2022 and those on the motor in 2019.

Below the hydraulic system is a bank of 5 110 ampH lead acid leisure batteries. These are charged by their own dedicated 65amp alternator and can also be charged via shore power. The solar array on the cabin roof is capable of supplying 11 amps to the system on sunny days, which is enough to keep the boat running while away, and allows for a top up whilst moored.

There is a separate 375 litre diesel tank under the starboard gunwhale. This is not connected to the main drive tank and is used for supplying the Bubble Diesel stove in the lounge via a single washable filter. However, a balance pipe does exist so they could easily be joined together to give a larger range. There is a 'hospital' style silencer which passes through this tank for engine exhaust to the starboard side.

The black tank is located to the rear of the engine room. The Jabsco sea toilet discharge pump is located under the rear steps which has a turn style seacock at the point where it exits the hull.